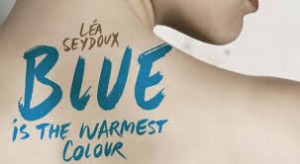 An in-depth character study that is really more of a gratuitous romp into realms of exploitation cinema that are rarely seen today. Travis Bickle might have been a fan, but Cybill Shepard and I are put off. This 3 hour French monster had me shifting in my seat with boredom while wondering what the NC17 rating was all about for the first 30 minutes or so. Then the heavily  lit sex acts began and they were long (like every scene in this movie) and they were graphic, needlessly graphic. Nothing takes a viewer out of a film more than a sex scene and while collectively these explicit scenes made up less than 10% of  screen time, that’s still counts for close to 20 minutes of utterly uncomfortable, disconnected viewing. One of these sex scenes reportedly took 10 days to shoot. There are way better movies and many of them that were shot in their entirety in less than 10 days.

It’s a simple enough story. A young high school girl, Adél learns she’s attracted to women shortly after a dull fling in the straight world. She shacks up and eventually moves in with an experienced  and older college aged lesbian. All of this flirted with something interesting when Adéle, played by an exceptionally talented and adorable Adéle Exarchopoulos, is confronted by her high school chums about her new sexual leanings with some hostility. Was prepared for some real heartbreaking intolerance and painful lessons for the young star. Instead we watch Adéle discover the lesbionic world of protest parades, gay bars, oyster eating parents and the act of scissoring for the next 2 plus hours.

When you consider the fact that this lesbian love/sex story was written and directed by a straight male you have to consider the question of why. Not only why would he be drawn to this, but more importantly, why are others so drawn to it? Won the Palm d’Or at Cannes and currently holds an 89% approval rating on Rotten Tomatoes as well as an 8.0 on IMDB. Cut the sex scenes and what’s left is a sinuous, meandering, albeit raw love story worthy of snob affection, but little else. It is troubling that so many people feel the need to adore this misfire of an exploitative experiment. Are the sex scenes for the sake of instant infamy? The actresses pour their hearts out and for what?

If there is anything to take away here it is the performances. Both Adéle Exarchopoulos and Jonathan Rhys Meyers look alike, Léa Seydoux were undoubtedly committed (prosthetic vaginas were used in the oral sex shots as both actors are straight) and will live in your head forever if you make it through this one. Never has The Cannes film festival awarded the Palm d’Or to not only the director, but the two actors as well and while they endured months of uncomfortable and seemingly agonizing filming, a positive rating from the public will not make it ok and worse yet, it can’t make this a good movie.

SHOULD NOT WATCH (Three incredible scenes involving this Adéle Exarchopoulos give it lasting prowess and keeps it out of the cellar.)

Posted on Friday, November 15th, 2013 at 3:56 am and is filed under Reviews.
You can leave a response, or trackback from your own site.