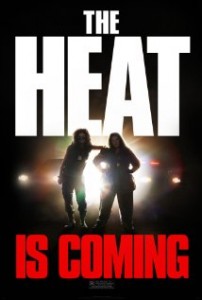 If you’re on the fence about seeing The Heat, let me help you over. Despite an uninspired climax and a nearly unbearable and overbearing soundtrack and score, this movie is very, very funny. It’s refreshing to see a movie with two female leads that is as strong as this is. Unsurprisingly the last female vehicle I saw that got this many laughs out of me was Bridesmaids, also directed by former Freaks and Geeks scribe Paul Feig. He knows how to get the most out of his comedic actresses and they ‘re able to mine for laughs without constantly referring to their nether regions.

Melissa McCarthy steals every scene she’s in. That is quite the feat when you consider she shared these scenes with the likes of Sandra Bullock, Michael Rapaport, Marlon Wayans, Tony Hale, Taran Killam, Kaitlin Olson as well as the one and only Bill Burr. These are some very funny people from all walks of the comedic world. I knew McCarthy was funny, but I didn’t know she could be this riotous.  END_OF_DOCUMENT_TOKEN_TO_BE_REPLACED

Posted by Anderson on June 28th, 2013
File under Uncategorized