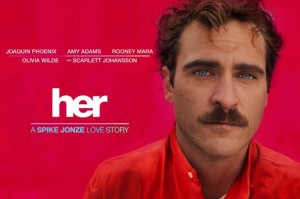 An Emos Terminator. After the initial response to Scarlett Johansson as the disembodied AI/OS wears off, you’re left with the building blocks of a romantic comedy, minus the comedy. There is poetic humor here, just not the kind you’d typically find in a romantic comedy. Not the first time the idea of falling in love with an AI has been explored either. See Robot & Frank, AI and even Moon to a lesser extent. She is incredibly lovable and you’re missing something if part of you doesn’t fall for her, but it’s a gimmick, a big idea gimmick, but a gimmick nonetheless. That’s all fine and good and there is a large audience out there who love their love stories and they’re bound to love this one. Thankfully Her has something for the rest of us as well. The world where this gimmicky love story takes place is transportive.

Set in Los Angeles in what must be at least 50 years from now judging just from the huge number of buildings depicted that are not there today. The poppy interior design of his office, the open space, light fixtures and giant windows in his living space lends itself to the the overall clean and sleek future that could very well await those of us fortunate to live that long. Something about that pink hue that makes me want to dive in, curl up and nestle. For those of us that won’t live that long, (just quit smoking again) the experience of this film will have to do. Nothing dystopian about the physical constructs of this new Los Angeles. Perhaps the most subtle, yet imaginative future to be depicted on screen to date.

Yes, we are all disconnected in Spike Jonze future, much like we are today. Everyone wanders about with what looks like chess pieces poking out of their ears as they talk to their machines, OS’ or perhaps even other humans. Jonze doesn’t smash us over the head with this, however and it’s this subtly that works with such sublime effectiveness. Joaquin’s Theodore isn’t a sad sack, lost cause withdrawn from all human interaction and his relationship with Amy Adam’s character helps drive this point home. The truly disturbing message that is being suggested here is the ever growing gap between us that our technology continues to foster. This is an idea/issue that was examined more thoroughly and depicted with more clarity earlier this year in Henry Alex Rubin’s tragically overlooked, Disconnect.

Her should be seen on the big screen for it’s beauty and imagination, but Disconnect should be sent away for, for it’s message and well rounded narrative.

Posted on Thursday, January 9th, 2014 at 5:21 pm and is filed under Reviews.
Both comments and pings are currently closed.