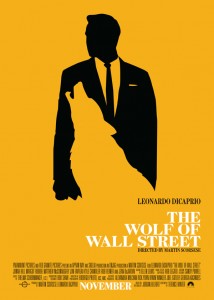 Rich white men behaving badly for nearly three hours would be a more accurate title. Not as catchy though. Scorsese’s Christmas comedy is overweight, coked up and luded out. Problem is, it’s funny. Shouldn’t be, but it is. Was embarrassed at my laughter and attempted to stifle it on numerous occasions, but failed every time. Was it the overt Goodfellas undertones that seduced me? Jonah Hill’s overbite? Maybe DiCaprio dusting off his inner Gilbert Grape performance for his Quaalude scenes that got me going? Unfortunately it was all of these things and more that caused me to cover my mouth in horror (albeit gleeful horror) as spontaneous laughter spewed forth.

It should be noted that this is the director’s first feature since the children’s movie, Hugo. You have to look back to 2006’s The Departed to find a Scorsese movie with men doing bad things.  With that in mind you get the feeling that he was scratching a seven year itch and having a great time doing so.

Based on and around penny stock trader, Jordan Belfort and his cronies, not one of these son’s of bitches was worth caring about, but you just don’t care because you’re having too much fun watching them not care. The first 90 minutes goes on like this and is unrelenting. Could’ve used a 45 minute shave, but how could anyone chose which deb ocherous (not a word, but it should be) scenes should be purged? This first half is by no means a good movie. Twas a plot free zone and by the time DiCaprio’s Belfort is getting pressured on his yacht by the bureau, the only side you can safely say you’re on is any side but his. The rest unfolds more like a traditional riches to rags story we’ve all seen before, but that’s not to suggest it’s not great. Despite a severe lack of empathy for any of the main players due to their lack of empathy, you’re compelled to watch. Not worthy of an Best Picture nomination, but worthy of repeated viewings. This is the work of a master of his craft having the time of his life. The byproduct may look like the glorification of ill behavior (this stuff is definitely being glorified) and a bloated narrative, with some terrible musical choices, but in the end, this is a film that will be referred to, quoted and watched by men for years to come. Can’t say that’s a good thing, but I accept being part of the problem.

Should Watch (Not so much for the ladies.)

Posted on Thursday, January 9th, 2014 at 3:09 pm and is filed under Reviews.
Both comments and pings are currently closed.