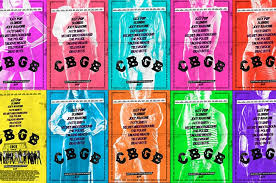 Cockroaches squishing, large dogs a pooping, Dead Boys a bleeding and junkies a joking. If a song were to be written for Randall Miller’s movie CBGB about Hilly Kristal’s (Alan Rickman) famed New York Punk Club, these lyrics would be more than apt. Sound a bit cartoony? It should. Miller’s first film since his 2008 Bottle Shock (very sweet movie about wine also staring Rickman) the entire story is told through John Holmstrom’s PUNK Magazine, complete with the occasional freeze frame accompanied by comic book styled animation including panels, bubble blurbs and subtitled sound effects. Not always effective, nor did every joke hit its mark, it did keep this otherwise filthy and depressing gutter punk Bowery based club setting a light and fun one.

The set is a constant, but the characters keep coming. The story unfolds like a cascading waterfall that drops new treasures at a perfect level of regularity. Just as you become accustom to your surrounding and it’s characters new acts are introduced. You’ve adjusted to Rickman as Kristal, you accept that his dog is not house broken, you rely on the house heroine addict  (played perfectly by an unrecognizable Freddy Rodriguez) for comic relief. You’ve accepted all of this and just as you’re ready to move on, get the bill and move onto a new bar, Iggy Pop (Foo Fighters’ Taylor Hawkins) stops by. Then The Ramones and Debbie Harry and Lou Reed and Patti Smith and The Dead Boys. New, yet familiar faces continue to come onto the scene, one after the other. Bradley Whitford as a coked up record exec. left me wanting more, not only of him, but all that came from that dirty little club.

Posted on Friday, October 4th, 2013 at 1:42 pm and is filed under Reviews.
You can leave a response, or trackback from your own site.