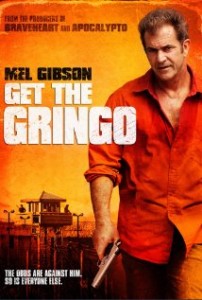 The title of this one as well as a weary sense of Mel since The Beaver as well as some other off screen shenanigans had me pushing this one down my queue. Finally took the plunge and wow am I glad I did. The most fun I’ve had in front of a screen in weeks.

Written and produced by Gibson and directed by first time director and Apocalypto assistant director,  Get The Gringo is a Mel movie as in he was in charge. This is a great thing if you’re a fan of the aforementioned Apocalypto or Braveheart. It’s easy to forget that this guy is ultra talented in front of the camera as well as behind it.

Get the Gringo or “How I Spent My Summer Vacation” (the title used in the UK) is a different kind of prison movie. Actually, it’s a movie about a different kind of prison. El Pueblito prison in Tijuana Mexico was a real place before it was destroyed in a planned raid by more than 2,000 law enforcement agents in 2002. You’d be best served to read this article before watching Gringo. It will help with all the questions you’ll surely be asking yourself such as: Is This Real? Why are there kids in there? Why do the prisoners have guns? Why are there houses and stores in prison?  I usually like to go into a movie knowing very little, but knowing that I’m not watching invented Hollywood bullshit would’ve allowed me to enjoy this one even more.

This, bloody, informative and hilarious movie never got it’s due here in the States, but was instead released and somewhat buried as a video on demand flick and that’s a shame.

SHOULD WATCH, 4 of 5 (Bordering on must watch.)

Posted on Saturday, November 10th, 2012 at 12:51 am and is filed under Reviews.
You can skip to the end and leave a response. Pinging is currently not allowed.