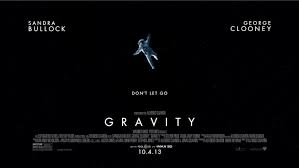 I enjoy Disney’s Star Tours as much as anybody, but never yearned for a 90 minute version. Should start by stating that I’m one of those purist film snobs that can’t stand the idea of 3D. Those of you who listen to The Film Vault already know this. That being said, I didn’t see Alfonso Cuaron’s first film since Children of Men as it was made to be seen, in 3D. Not sure that space debris floating by my face would’ve made much of a difference though.

Back to that Star Tours reference. The ride experience first crept into my head with Ed Harris’ uncharacteristically stiff  work as the disembodied voice of Mission Control during an unfathomably impressive opening uninterrupted long take. It was the  loquacious George Clooney and his flipped, emotionally vacant delivery that caused the comparison to take an unrelenting deep root throughout. I’d suspect NASA astronauts are trained to keep their cool in the face of adversity, but Clooney’s character was so devoid of affect that he came of as an empathy-free sociopath.

Sandra Bullock is no stranger to the fish out of water role and might have been clinging onto that familiarity of the unfamiliar a bit too tight here as Astronaut Ryan. During the early and clumsy exposition scenes, (Cuaron wrote this one with his son) we get the sense that she is not only uncomfortable, but also grossly under qualified. Ryan’s level of dread leads you to believe that she would be grimacing if she were atop a public pool’s diving board let alone orbiting the earth’s atmosphere.

So early on we are asked to believe that NASA would send a sociopath and a woman with a fear of heights on a mission into space. Tough sell. The only thing that could have saved it for this jaded viewer would be spectacular effects and breathtaking scenery. Neither was delivered (at least not in 2D) and I continued to imagine these two being lost at sea rather than adrift in space. The critics would have to agree that were that the scenario this would be almost unwatchable. That was not the case and Gravity is watchable for it’s originality, and ambition if nothing more.

I’d be remiss not to voice my objection with the actual title. Considering the film is called Gravity, such a force couldn’t be more absent. The equivalent would be to call the recent Ron Howard Indie 1 bio pic  Slow rather than Rush or the highly recommended Prisoners being called Freedom.

In the end Gravity is more of a summer blockbuster lacking the obligatory high octane action sequences (though there are a couple)  rather than a fall contender due to the utter lack of human interest or effective drama.

Posted on Friday, October 4th, 2013 at 4:12 pm and is filed under Reviews.
You can leave a response, or trackback from your own site.