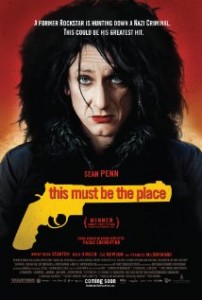 Don’t let the curiosity factor interfere with your better judgement. This Must Be The Place is proof positive that an interesting casting choice coupled with beautiful  and inventive photography, not to mention an original story, is not always enough. At the risk of sounding spiritual and or clichéd, movies are magic. It takes a certain amount of luck and yes, magic for a film to really work. This one didn’t have much of either. Sean Penn is one of our greats, but I never forgot he was Sean Penn here. That is to say that he didn’t nail the Robert Smith-like, aged pop star, Cheyenne. He was Sean Penn doing a quirky character. Not a terrible character, just not a terribly interesting character. This proves to be a huge problem when it’s a restricted narrative and that character is onscreen 98% of the time. Think About Schmidt with big hair and lipstick.

The first half of the movie is a getting to know you bit, but we never actually get to know anyone. 20 years out of the spotlight, Cheyenne lives with his aggressive wife Jane, played by Frances McDormand in a mansion in Dublin, Ireland. It should be noted that McDormand is married to half of the Coen Brothers, Joel Coen and This Must The Place at times felt like a love letter to the directing duo. I’d have to guess that Joel didn’t visit the set much or lend much of his  “magic” to the production.

At about the halfway point the story takes an abrupt left turn and we find our gothic protagonist hunting a Nazi war criminal in middle America. This sudden shift and clumsy storytelling has me asking what happened? It’s as though an entire 2nd act was cut out. Reminiscent of Tiptoes and how the studio butchered Matthew Bright’s opus about little people, I’m suspicious that something similar might be afoot here. The delayed US release and ultra limited screens may be another clue.

The climactic scene, atop a frozen lake in Utah, was the first time I cared about anything. It was done with great finesse and and will stick with me forever, but as the saying goes, too little, too late. 90 minutes of disjointed apathy is not worth 8 minutes of magic.

Save your time and money and watch the Trailer instead.

COULD WATCH, 3 of 5 (More of a Should Not Watch, but couldn’t do that to something this original.)

Posted on Thursday, November 8th, 2012 at 12:53 am and is filed under Reviews.
You can skip to the end and leave a response. Pinging is currently not allowed.