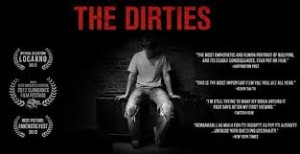 We’ve got a good one here. It’s been too long since a truly independent film has come along and been so inspirational. Written, directed by and staring an actual film student in Matt Johnson, The Dirties takes cues from found footage flicks as well as faux docs such as Man Bites Dog and does so with absurd effectiveness. It’s easy to say “You’ve never seen a film like this”, but to actually mean it is rare. This is one of those films. With no budget and a nonexistent shot plan, Johnson and a skeleton crew of four dared to tell a story that humanizes the bullied who bully back, and it works. Jarring, poignant and somehow exceptionally funny throughout, this thing needs to be seen. And you mustn’t forget, “We’re Just Here For The Bad Guys.”

Posted on Saturday, May 31st, 2014 at 3:17 am and is filed under Reviews.
Responses are currently closed, but you can trackback from your own site.