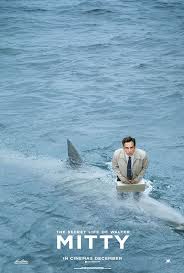 Only if Mitty forwent the entire point of the movie. Had he ignored his inner adventurer and instead stayed in the office, this could’ve been a contender. If he never went looking for the sanctimonious Sean Penn on the mountain he would’ve never tried to teach us the overtly simplistic and ultimately insulting lesson that life is about life. Not since Into the Wild (directed by Sean Penn from his mountain perch) has such a finger waging message been shoved in our face via the silver screen. Damn shame too as there is so much to like about Mitty and his secret life.

His awkward infatuation with Kristin Wiig, the impending closure of Life Magazine, a bearded Adam Scott as his new and terrible boss were all very enjoyable and worthy of their own full length feature. Shades of Office space were afoot before it fell off and the absurd E Harmony phone calls began. Absurd doesn’t have to be a detractor, but when there isn’t anything remotely possible within that absurd construct then it just becomes distracting and tiresome. The calls he received from the lonely rep were just that, much like Forest’s running or Benjiman Button’s shrinking.

It is worth a viewing just for the photography and composition if nothing more. Was also nice to finally see Iceland playing itself rather than doubling for an alien planet (Prometheus and Star Trek into Darkness) or a post apocalyptic US (Oblivion).

Could/Should Watch (First ever could/should! Too much right here to justify a lowly 3.)

Posted on Saturday, January 18th, 2014 at 12:58 am and is filed under Reviews.
Both comments and pings are currently closed.