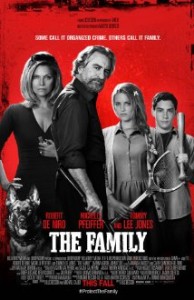 The cold open is worthy of any good Besson movie (see Leon: The Professional and or The Fifth Element.) A ruthless hit man pays a visit to an unsuspecting and targeted family. So far so good. After that brief and ghastly encounter we get the pleasure of meeting the family. This is where things start to get dull. We’re only five minutes in and it’s already exposing itself as a paint by number studio vehicle. DeNiro (Giovanni Manzoni, AKA Fred Blake) is ultra-violent, his wife is a loose cannon, the son is a junior master mind and his 17 year-old daughter (Glee’s Dianna Argon) has a vicious and vindictive core beneath a beautiful veneer that flares up at a moments notice.

If this doesn’t all sound too familiar then you probably don’t waste much of your time watching movies or TV shows or reading novels or reading this website. For the rest of you, there’s not much new going on here. At times The Family felt more like a YouTube compilation video of tired cliches from an array of other movies. The family’s stories were predictable, tired and weak. Clever showed up only once (more on that below.) Creative arrived late and out of shape and was mostly ignored while Fun was simply a no show. There is a school scene where a teacher asks the son (played more than effectively by John D’Leo) is asked for an assignment which he does not have. He tells her with confidence that he does in fact have it as she holds out an expectant, but still empty hand. He then points to his head and tells her he just needs to jot it down. It was at this moment that I envisioned Luc Besson saying and doing the exact same thing in an impromptu pitch meeting for this very film. Just about everything we see on screen already lived in not only Besson’s head, but the rest of our heads as well.

DeNiro’s Giovanni flirted with fun, but lacked the disernble nuances that a memorable character needs to have with the exception of his multifaceted use of the word fuck. But even this was somewhat rammed down our throats and left little to the discovery of the audience. Other than that, Giovanni was an ex gangster who “loved” his family while continuing to satiate his homicidal urges. Pfeiffer meanwhile comes off as scary bitch who you don’t want to be around.

Did I mention that the use of music was nothing short of appalling? It managed to make even the decent scenes come of as deliberate and self aware (see scene where Argon uses a tennis racquet.)

This is one of those rare movies where you’ll find yourself taking peeks at your timepiece and yearning for an end, all while lot’s of stuff is going on. The last time I had this feeling was with The Watch and before that Wing Commander.

Now let’s take a moment and discuss the scene where Clever decided to show up with some help and seemed to even be inspired by his/her friend Fun. DeNiro/Giovanni/Fred writes his memoirs throughout (I can only imagine that thiese briefly alluded to memoirs were much more entertaining than what I was watching) and is known amongst his French neighbors as a true American and New Yorker. As a result he is invited to publicly view and debate a classic Sinatra film at a monthly film society club. Without giving anything away, this turns out to be a scene nearly worth the price of admission. But in the end it’s not.

Posted on Saturday, September 14th, 2013 at 1:26 am and is filed under Uncategorized.
Both comments and pings are currently closed.