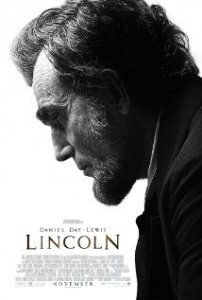 Lincoln might just be the best movie about Lincoln I’ve seen all year. After all, we musn’t forget that Abraham Lincoln: Vampire Hunter was also released this year. I can’t be sure which I disliked more. While both were as dull as can be, at least this Lincoln had some semblance of truth, no matter how meladramatic it was at times.

Yes, Daniel Day Lewis embodied what we know as the 16th President, just as he always does with his subjects. Problem is Abe is not the leading man type. It’s been said in fact that if he were to run for office today he wouldn’t stand a chance with the advent of film, video and audio. The people would not like his looks or manner of speaking, no matter what it was that he was trying to say. He comes off as your vaguely likable uncle with a slight sense of humor and the perfectly placed stories and fables. DDL’s gangly limp around the White House as he walked in the President’s shoes made me wish I was instead watching the bowlegged strut of Bill The Butcher. I couldn’t help but think that just a few hundred miles to the east at this very same time in history, all the glorious characters and their shenanigans were taking place in Gangs of New York. How stuffy and stiff this side of history was in comparison.

The most inspired performance in this sea of overacting and long winded performances was by James Spader as a fat WN Bilbo. He and Jackie Earle Haley as Alexander Stephens (the Confederate Vice President) were the closest things to interesting characters in the bunch. Everyone is going on about Sally Field as Mary Todd Lincoln, but it felt like she was trying… very hard to be crazy. Sadly I won’t be surprised if she gets an Oscar nomination and expect the same for the movie itself. Tommy Lee Jones as the self rightious Thaddeus Stevens was insufferable with his drab monologues and stage play delivery.

The inherent problem with Lincoln is the story. It’s a great historical event to be sure and as a child I was riveted to learn about it, but making a 149 minute motion picture about a bunch of white men trying to gather votes to amend the law is tedious, predictable and mind numbing. And while the story was unavoidably predictable, the direction was as well, with predictable Spielberg pandering such as close shots of wonderment and another overbearing John Williams score placed in all the “right” places to let us know when we should feel good in case we had dozed off for a moment.

I should report that people were crying in the theater all around me by the end and applause broke out when the credits rolled. I did not break out into applause, but instead broke out of the theater rather than watch the credits as I usually do. As I walked to my car I felt guilty for wishfully anticipating our great President’s onscreen death so as to put an end to my in theater boredom induced suffering. I felt free, as free as I had felt in a long time after being cooped up in that dark seated temple for nearly 3 hours. The trees were green, the air was crisp and I truly appreciated my freedom to move where I pleased. As I got on the 101 freeway to travel northbound to work as a freeman, it occurred to me, maybe Spielberg really is a genius.

Posted on Monday, November 26th, 2012 at 11:20 pm and is filed under Reviews.
You can skip to the end and leave a response. Pinging is currently not allowed.