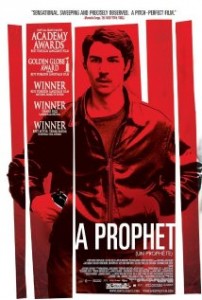 This French prison film came highly recommended and I went in with high expectations. Believed those expectations would pay off as I was hypnotized during the opening 20 minutes. Nothing in my life mattered as I experienced the lead’s horrific predicament. An hour later I cared a lot less and before the 155 minutes of this lengthy French prison epic had elapsed I was a bit confused, a bit disinterested and a bit disappointed.

This is not to say that A Prophet was a waste of my time, nor would it be a waste of yours. If you enjoy foreign movies and or gritty tails, A Prophet should at least be on your radar. It was definitely well crafted and the Prophet, played by then new comer, Tahar Rahim is excellent and most convincing.

The problems for me lay in the lack of heart. The film just seemed to lack emotion on some level and for my money I’d rather watch 1993’s Blood In Blood Out.

Posted on Monday, November 5th, 2012 at 9:58 pm and is filed under Reviews.
You can skip to the end and leave a response. Pinging is currently not allowed.