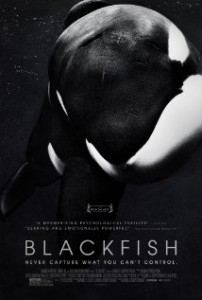 Gabriela Cowperthwaite’s documentary finds it’s origins with the capture of the then juvenile Orca who the world would come to know as Tilikum, an actual Killer Whale who has indeed killed three human beings to date, yet continues to entertain us in his tiny pool in Florida.  She explores the lives of exploited Orcas living in captivity whose purposes are to entertainment for profit. What we learn in this devastating documentary is an old story, but a story that needs to continue to be told. Greed and power win out over empathy and compassion in plain site on a regular basis and will continue to do so unless films like Blackfish and The Cove get the recognition they deserve. While not nearly as brutal, bloody or gripping as The Cove, Blackfish packs a punch, but doesn’t beat us over the head while doing so. Cowperthwaite leans on interviews from a number of former Sea World trainers rather than focusing on bleeding heart activists with iron deficiencies who merely cry from afar. She speaks with people who don’t only love the animals, but they actually know them. These firsthand accounts coupled with compelling footage help the viewer discover a blatant reality that is not pretty, but must be acknowledged. A reality where management have no qualms with separating a young calf from it’s mother, a mother who will make screaming sounds that none of the staff had ever heard before and for hours on end. Grief is a very real part of the Orcas reality.

One of the interviewees suggests that 50 years from now we’ll look back on this time and practice as barbaric. If this turns out to be a prophetic statement, it will be due in large part to the awareness brought about by this film. Riveting, compelling, devastating as well as touching, this is a documentary that everyone should not only see, but react to as well. Blackfish is what documentaries are for.