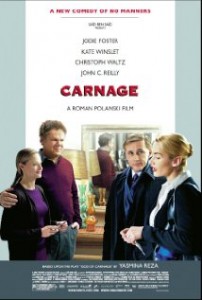 Like an 80 minute episode of Curb Your Enthusiasm, but not nearly as funny and far less plausible. The biggest surprise in this unnatural and often stiff comedy by exciled Roman Polanski is that John C. Rielly outshines his three costars. I didn’t buy the puking Kate Winslet, the smug Christoph Waltz or the frantic Jodie Foster, but a down to earth and affable Reilly almost made this stage play adaptation worth while.

Posted on Sunday, December 16th, 2012 at 2:55 am and is filed under Reviews.
You can skip to the end and leave a response. Pinging is currently not allowed.