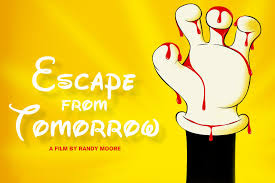 The satirical fantasy film that was famously shot guerrilla style at Disneyland and Disney World without the mouse’s approval. How could this movie even exist and how could you not let your curiosity tip the scales? First time writer/director Randy Moore (who looks distraught and concerned if you were to judge him by his IMDB shot) used a cast of unknowns and shot it in black and white on a Cannon 5D camera. If it were not for the world famous and ultra litigious backdrop in which this film was shot I don’t suspect any of us would have ever heard of it and I know I wouldn’t be writing about it and for that reason I kind of wish it were shot elsewhere.

The story follows a family of four around Disney World for a day. It’s the prototypical American family, a pudgy father, the bitchy mother and two bratty kids aged around five (girl) and six (boy). Jim the father is at the focal point and his fantastical day at the happiest place on earth consists of what a middle aged sexually frustrated man would consider happy rather than a child. It should be said that Jim’s day begins with being fired. Not wanting this to mar his family’s get away he keeps it to himself and moves forward with their last vacation day. His day starts out normal enough if not a bit creepy as his idea of the happiest day is following two under age French girls around the park. His mind begins playing tricks on him as do his eyes as startling computer generated effects turn his son’s eyes black and twist the faces of marionettes. A number of juvenile sexual innuendos are touched upon as is the scat humor and you might suspect that Moore has some kind of spit fetish before it’s over. The themes here concern happiness, conspiracy and what middle age consists of.

The best part of the film by far is the feeling that you’re watching something a large corporation would rather you not. Disney has brilliantly stayed quiet as not to give the movie anymore free press and hope it will just die a quiet death. In the end your left mildly amused a few times (Jim the dad gets drunk and throws up on a Mexican water ride) disgusted and distracted by some horrid use of green screen, confused by the story itself as well as the reported $650,000 budget. Where did this money go? You never get the sense that Moore is attacking Disney, but instead feel he has a certain degree of admiration if not merely a sentimental one. So why then would he want to juxtapose such sophomoric and grotesque images with his and many of our fondest childhood memories? I’d guess we’ll never know, but what I do know is that if Escape From Tomorrow was shot with permission or shot almost anywhere else on earth other than at that happiest place you wouldn’t have just wasted your time reading this and I wouldn’t have wasted my time writing it. Point is, don’t waste anymore time with this one.

Posted on Thursday, October 24th, 2013 at 5:25 pm and is filed under Reviews.
You can leave a response, or trackback from your own site.