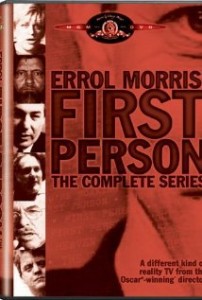 All that aside, I’m here to sing the praises of his short lived television series called First Person. In 17 episodes, Morris interviews 17 subjects that range from a squid scientist to an author who met and married not one, but two serial killers. Other interviews include a mob lawyer, a man obsessed with cryogenics, two different certifiable geniuses (both have worked as bouncers incedently) one of which repeated his senior year of high school a multitude of times and on purpose before he went on Who Wants to Be a Millionaire only to lose and later sue the program. Needless to say, these are interesting folk.

Morris’ style is very recognizable, but more importantly, it works. He won an Academy Award in 2004 for The Fog of War, what I consider one of his less imaginative efforts. If 17 episodes is too much of a commitment (it’s well worth it) then I’d recommend Mr. Death, where Morris examines the life of  Fred A. Leuchter Jr. All you should know about Mr. Leuchter going in is that he was the leading American execution device designer, “was” being the operative word here. Don’t even read the tagline or brief IMDB description for full effect.

Either way, if you haven’t yet acquainted yourself with Errol Morris and his subjects, it’s high time that you do.

Posted on Thursday, August 9th, 2012 at 10:13 pm and is filed under Reviews.
You can skip to the end and leave a response. Pinging is currently not allowed.