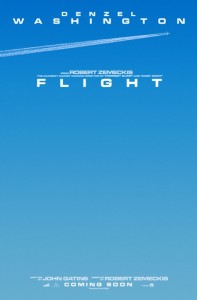 The first 20 minutes are Zemeckis and Washington at their best. The story is moving along, the drinks are being drunk and the drugs are being snorted as the passengers buckle up. What comes next is unfortunately and unavoidably predictable as the trailer for Flight has been running everywhere for the past 3 months. “Well done” does not do the plane crash sequence justice. Not since United 93 have I been so moved by such an onscreen flight wreck.

What comes next though is 90 minutes of denial, dead spots and dark corners. The only source of levity is found in the drug dealing (John Goodman) who shows up at the hospital with his bag of goodies. Goodman was great and I haven’t seen him like this before, but the placement felt forced and just like that he’s gone. It was blatant comedy relief in an otherwise dismal story and as a result it felt more like force feeding and less like relief. He does have an incredible encore, but I felt his comedic absence and wanted more.

I also have to mention the old and tired soundtrack which includes too much Rolling Stones and way too much Red Hot Chili Peppers (only one song, but that’s way too much for me).

Soundtrack and clumsy character placement aside, it was the overall blurred lines that bothered me most. Usually I like the lines blurred, but not knowing who to like, trust or root for lent itself to the services of utter anger and displeasure with what ended up to be a sanctimonious and preachy climax. Reminiscent of the high and mighty message at the end of Minority Report, this one bothered me. Without going into it (it is the end of the movie after all) if the Don Cheadle or Bruce Greenwood characters would have been more smarmy and unlikeable, I would have been able to swallow the climactic court scene.

All this bitching and I haven’t even complained about the spider tattoo. According to Hollywood, if one shoots heroine, then one wants creepy spider, skull or snake tattoos to adorn their arms forever.

And God. Was it pro religion or anti Jesus. At times God is openly mocked, but by the end I’m fairly certain he is being thanked. Felt like they were playing both sides of the cross.

The crash sequence was better than what Zemeckis did in Cast Away, but the movie as a whole was not. The two movies have more in common than a plane wreck. They are both about men who become isolated after a tragic event and that tragic event proves to be the silver lining necessary in the recovery of both characters lives and well being. I’ll watch Cast Away again, but never Flight.

Perhaps it’s the heavy drinker in me that is resisting this award season darling, but it’s more likely my inner film snob that resents pandering and heavy handed “message movies.”

Posted on Thursday, November 15th, 2012 at 1:44 am and is filed under Reviews.
You can skip to the end and leave a response. Pinging is currently not allowed.