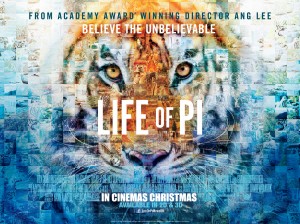 Had to see this a second time to be sure that I wasn’t overreacting. Results are in. I love Life of Pi. Not since the Dark Knight have I been so forgiving of questionable things in a movie as a result of what there was to like/love. I see a lot of movies, but nothing quite like this as for what goes on in that little boat.

Director Ang Lee is a guy who never makes the same movie twice. Some are great such as The Ice Storm and Ride With The Devil, others not so much. He was the 4th name attached to direct Life of Pi (a 2001 novel by Yan Martel) over the last decade and obviously the only one who had the guts and skill to pull it off. They say the three most difficult things to work with in making a movie are animals, child actors and shooting on water. Those three elements are what mesh together so well to make what is my favorite movie of 2012 thus far. Sure Lee cheated by using lots and lots of CGI (some of it questionable, but forgivable) and shot much of it on a soundstage and in a man made ocean. He didn’t cheat however when it came to working with children though. In fact he cast an inexperienced kid in Suraj Sharma who makes his feature debut here. He was astonishing and the entire movie could have been written off as a joke had he not been so strong.

He and cinematographer Claudio Miranda could have also cheated with jarring swish pans and other obnoxious chaotic camera movements so often employed with the types of challenging scenes offered in Pi. They didn’t though and as a viewer you always have an idea of where the characters are in relation to one another and the action makes perfect sense.

I was ready to write this one off and with all the talk of God, spirituality and aforementioned questionable CGI, not to mention all the 3D toting and Avatar comparisons being made it’s remarkable that I didn’t. The fact that Life of Pi has won me over despite this toxic culmination of things I normally can’t stomach is remarkable in itself. It’s as pretty as Avatar, but without the asinine dialogue. Thankfully the tiger doesn’t talk.

Posted on Thursday, November 29th, 2012 at 10:04 pm and is filed under Reviews.
You can skip to the end and leave a response. Pinging is currently not allowed.