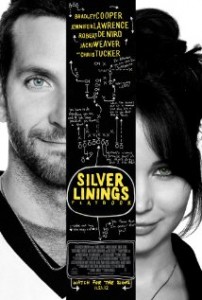 Both Bradley Cooper and Jennifer Lawrence are spot on as bipolar, self destructive and tortured souls in David O. Russell’s latest effort. This is part of the problem with Silver Linings Playbook, based on the 2008 Mathew Quick novel by the same name. I don’t know about you, but I’ve spent too much time with people resembling these two (about a half a dozen exgirlfriends alone) and these days I actively avoid them.

There is plenty to like about this one as is the case with every Russell film ever made. I can honestly recomend all of them and would include Flirting with Disaster and The Fighter as Must Watch Movies. Making a movie with two fairly unlikable and mentally ill leads is both daring and far from the Hollywood formula that bores us all too often. But at the same time, spending two hours with these two unbalanced creatures becomes grating early on. For every great scene that sucks you in, there is a scene of harsh and at times very dark annoyance that pulls you out. Many of these scenes could have been portrayed as high and effective drama if a different score were employed. With just a few edits and an added for boding soundtrack and Playbook is no longer a comedy, but a dark drama, much like Alexander Payne’s Citizen Ruth.

I was surprised by the sloppy technical aspects. Sound issues and continuity, which I normally don’t notice or at least forgive, was more than distracting though out the film. It felt like it was a bit of a rush job which makes no sense.

But back to the good. As stated at the top, Bradley Cooper and Jennifer Lawrence were excellent. Especcialy Lawrence. I have never seen this side of her and am happy to report that she pulled it off. The supporting cast was great as well with the return of Chris Tucker and Robert DeNiro is in top form as the football loving Dad with OCD.

A bit of guilt beguiles me as I type this and maybe I am guilty of nitpicking here. I love a good dark comedy and this is both dark and was at least shooting for comedy. There are some laughs, but more clumsy attempts at predictable touching moments which were effective nonetheless. I fought them off, but tears won the battle and were set free down my cheek by the end. When held up against his other movies, this one lands in the middle which makes it a far better movie than most everything else out there.

Posted on Friday, November 30th, 2012 at 1:39 am and is filed under Reviews.
You can skip to the end and leave a response. Pinging is currently not allowed.