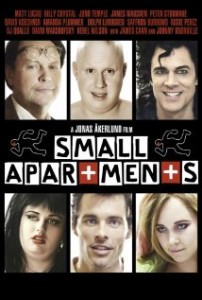 This criminally overlooked small dark indie comedy is indeed quirky, but not in a bad way. Quirk has been running rampant in recent years thanks to the success of Wes Anderson, David Lynch and more importantly the Coen brothers. All too often this quirk is used to mask an otherwise drab story or a set of weak characters or even a weak director. Small Apartments is not that kind of quirk. You get the feeling that Swedish born director Jonas Åkerlund (Spun and countless music videos) has nothing but genuine intentions in his use of this new four letter word. Each scene incorporates a bevy of cut aways which gives the viewer a sense of the  intricate set design and surroundings. “Lots of topography” as Peter Stormare put it so eloquently in the dvd featurette. “So many paint by number movies that don’t use this technique come out flat like a pizza.” I’m paraphrasing here, but it was another great point that the actor made. The characters are abundant and the  the  cast is enormous, but all are entertaining.

This was recommended to me with a caveat. It’s odd, it’s dark, but it’s interesting and no doubt original. As is so often the case, the less you know the better. It’s what you need to know about yourself before you go in.

Can you handle violence inflicted on a corpse (screwdriver to the chest, fire to the body and gun shot to the head)? Can you stomach the thought of underappreciated Brittish actor Matt Lucas parading about much of the film in nothing but tighty whities, pulled up socks and wooden shoes? Can you accept Billy Crystal (he’s perfect in this role) into your heart? If you answered yes to all of these questions then you’re in for a treat. The low ratings and reviews on some sites have me thinking that people checked out the cast  which includes James Caan, Dolph Lundgren, James Marsden and the aforementioned Billy Crystal, then went in expecting something more Hollywood typical. Go in without expectations and you should come out with a smile. I know I did.

Posted on Monday, March 4th, 2013 at 12:54 pm and is filed under Reviews.
You can skip to the end and leave a response. Pinging is currently not allowed.