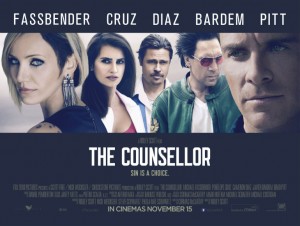 Like lecturing a class for a test that will come later, Ridley Scott’s latest is so heavy with dialogue and set up, your exhausted by the time anything actually happens. By the way, very little actually  ever happens. The subject matter involves wealthy yet slimy white collar characters and drug trafficking. Soderbergh’s tedious and overrated Traffic touches on similar themes, but was much more enjoyable. In fact, actual traffic as in being stuck in it, has been more enjoyable than The Counselor.

The first bad sign was the open which literally took place between the sheets. Michael Fassbender and Penelope Cruz let us know how much they care for one another with an intense oral sex scene. The next hour plus consists of Fassbender wandering about speaking with various people about a business opportunity that we learn or assume (I honestly can’t remember) involves drugs and or the trafficking of said drugs. Everyone he encounters speaks with lyrical prose, life learning riddles of supposed profound meanings as though they were descendants of Yoda. Each seemed to have as many lines as a Kevin Smith character. Whether it be the chronically wet Cameron Diaz with bad eye makeup and earrings that can only be described as massive dangling testicles or Javier Bardem as a club owning party boy whose character may have been original had the 80s never happened or half of  the preceding sleezy drug peddling characters of means not existed. Brad Pitt as Westray comes off like Brad Pitt as a cowboy at a dress up party and his lines were responsible for the bulk of my ire. Things like, “You don’t really know anyone until you know what they want.” Or, “If you don’t have a friend who will die for you, then you don’t have any friends.” No one was likable, the story was convoluted while uninteresting and leaves you not caring what comes next. This was Cormac McCarthy’s first screenplay and other than the obvious big budget and star studded cast it often felt like an amateurish effort which I know must sound crazy. While McCarthy is better known as the guy who writes great novels that get turned into good/great movies, (see The Road and No Country for Old Men) his screenplay writing did not translate smoothly to say the least.

A few things of note that should count for something. A cameo by one of my new favorite actors, Toby Kebbell (Dead Man’s Shoes, RockNRolla), creepy “catfish” sex which involved Diaz and a Ferrari, a couple of terrific and memorable death scenes as well as Fassbender. Almost felt bad for Fassbender as his performance must have taken a lot out of him and the film that surrounded it was not worthy.  Despite these few bright spots in an otherwise dreadful and dim film, The Counselor is easily the worst film I’ve seen this year and by far the worst Ridley Scott film ever.

Quick disclaimer: I’ve only seen 20 of his 21 feature length films with the exception of Robin Hood as I banned it for my lack of desire to see Russell Crowe in tights and shooting arrows.

Posted on Saturday, October 26th, 2013 at 3:35 pm and is filed under Reviews.
You can leave a response, or trackback from your own site.