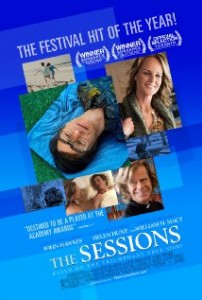 The true life story of Mark O’Brien, a 36 year old man afflicted with polio who lives in an iron lung and his quest to lose his virginity card ultimatly with the help of a sex surrogate. An unrecognizable John Hawkes of Deadwood and Winter’s Bone plays the virgin in the lung while an equally good Helen Hunt plays the surrogate. If you’ve got a thing for Helen, have at it, full frontal nudity throughout. Hunt is nude more often than not and Hawkes is horizontal and horny all film long. Shocking as this might sound with those two elements a constant, another constant is the dullness that sets in at about the 20 minute mark.

In the same vein as the The Diving Bell and The Butterfly, but not nearly as good, Sessions shoots for a lighter mood and in the process put me nearly asleep. While Hawkes is very good and likable as the sexually frustrated O’Brien, he had to be lovable to really make this story work.

Posted on Monday, December 10th, 2012 at 8:01 pm and is filed under Reviews.
You can skip to the end and leave a response. Pinging is currently not allowed.